Although we have known of the impending closure for some while and the last car "rolled off" the production line on the 12th of December, it is today that the plant officially closes.

We have heard the last roar of the lion at Ryton and it's a sad day for Coventry. 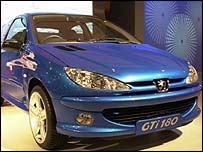 On the day Peugeot close their Ryton plant, Amicus Britain's biggest private sector union calls for stronger employment protection for UK workers and warns other employers that Peugeot's decision to abandon the UK has heralded a major union campaign to prevent other companies following suit.

BSS are now able to offer small quantities of spring steel strip, for delivery almost anywhere in the world via TNT.

Email us at bss@steelstrip.co.uk with your enquiry, or visit our website