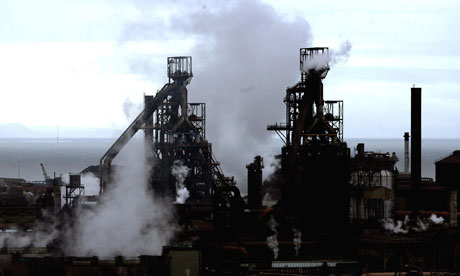 Steelworks in Port Talbot, Wales, owned by the Tata Group, one of the foreign firms 'investing in the UK as a key player in Europe'. Photograph: Anthony Devlin/PA

Britain's hard-pressed manufacturers have expressed growing unease that the financial sector was defended in Europe by David Cameron at the expense of Britain's industrial interests.

Steelmakers fear the UK could lose its "leadership" position on issues such as deregulation and competitiveness, while other manufacturers fear a growing isolation from a key market.

"In the short term it should make no difference as all the EU structures are in place, but across the longer term … we are going to become less relevant in political decision-making," said Ian Rodgers, director of the trade body UK Steel.

Read the full story by Terry Macallister at the Guardian

Whilst David Cameron and the Government have made a lot of noise recently about taking measures to help Industry and manufacturing their actions show that their traditional loyalty to the city is far stronger. Our largest export market is Europe and any step that weakens our influence within that market is a betrayal of the manufacturing sector.

BSS are now able to offer small quantities of spring steel strip, for delivery almost anywhere in the world via TNT.

Email us at bss@steelstrip.co.uk with your enquiry, or visit our website